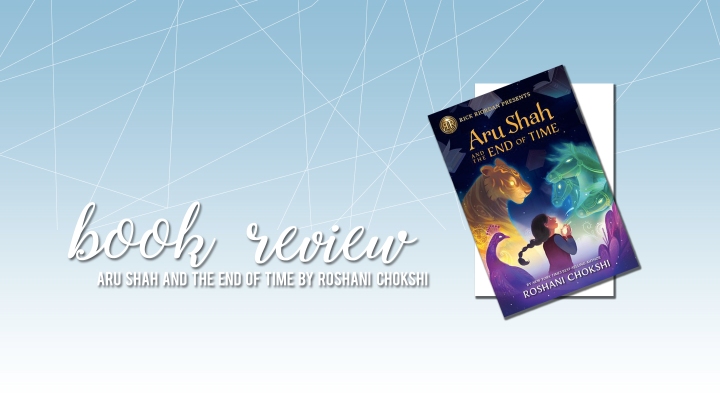 Gosh, how do I fully put into words absolutely how much I adored and loved this book. Roshani Chokshi’s work has never failed to impress me and I had, admittedly, high standards for this one. Imagine my euphoria at all of them being met tenfold.

I read Percy Jackson when I was 14 years old. I always had a strong love for Greek and Roman mythology (and still share connections to it), and loved watching it come to life in those books. Whenever Percy interacted with a known myth, I would jump with excitement because I recognised it, and also the innovative way it was portrayed. But, I had resigned myself to only ever getting stories of demigods and myths that aren’t from South Asia. Ten years later, I am sitting here, happily proven wrong.

Getting this book was an absolute blessing because I’m a born Hindu who grew up in India, surrounded by a lot of aspects of Hinduism. But, I also spent time abroad, as a child and as an adult. Between that, and the interactions with foreigners on social media, I was very used to facing confusion over Hindu mythology, Hinduism as a way of life, and a general misunderstanding of what it all means.

To get to read about all of that in such a fun and cool, new way is so refreshing, and so heartwarming. Every time the book mentioned a piece of myth, a name, a creature I had grown up listening about, I actually smiled until it hurt. There were appropriate gasps at epic name drops, and wide eyed wariness at the mention of someone I remembered being a foe. I have experienced this with Chokshi’s Star-Touched series too, and it doesn’t get old.

The story is absolutely enchanting – and since it’s not so much a retelling but a whole re-imagining, it keeps things interesting. Even the people most familiar with the myths and epics will be on the edge of their seats.

I know Hinduism and any imagining of it is a sensitive subject in a society very tightly bound to its beliefs and the perceived sanctity of our stories – but I, personally, found this kind of retelling necessary.

Most of our introductions to Indian epics and myths were moral tales told to us as we knelt by our elders’ feet, or the Ramayana and Mahabharata runs on DD (Doordarshan, not Death Danda) every Sunday morning. All of these were kept loyal to the original tales. Over the past two decades, many re-imaginations of the stories have cropped up in Indian literature (from The Immortals of Meluha, to The Palace of Illusions, to Vanara). However, they are still focused on an ancient setting.

This is not to discredit the retellings – I love all these stories. They are attempting to give a feminist reading of our epics by giving voice to condemned and badly perceived women in Hindu mythology, or they give voices to characters who are classified as demons/villains, a classification that sometimes stems from casteism, colourism and racism (actual negative aspects of taught Hinduism that need to be addressed). But they are still, all, a reiteration of the ancient South-Asian setting.

Here we have a modern and fun new take on myths that is engaging for young readers who are interested in Hindu mythology but want to experience it through the eyes of a 21st century child, and not a glossary of our million gods and their reincarnations. I also don’t understand the critique this concept has gotten when nobody complains about My Friend Ganesha, Chhota Bheem, or the tons of other mythological interactions aimed at children. It not only comes from a misplaced attempt at gatekeeping the study of Hinduism (which very rarely addresses actual harm of cultural appropriation and instead chooses to bully these kind of clever and important innovators), as well as a blatant disrespect for other known mythologies that are openly reimagined and how they are practiced.

This just happens to be a fun, new take on Hinduism while maintaining the respect and authenticity of the original stories. Moreover, it addresses the changing relevancy of the lessons we gain from them depending on the society we live in. It’s also noteworthy that Chokshi’s writing has a largely global fanbase – and making Hindu mythology friendly and as available to young non-Hindu readers (especially in societies that still stereotype Hinduism as an Eastern, foreign mysticism removed from reality and limit it to henna, many-handed gods, and a skewed understanding of karma) is crucial.

I think the key to the whole story is how absolutely funny and lovable all the characters are. I was actually reading this book while tagging along on a work-trip with my mother (coincidental), and every afternoon when she returned to the hotel, I would have snippets to share with her. She laughed so hard at how Aru views Asian uncles and aunties, or how Nakul and Sahadev became models in one reincarnation, and how Subala delivers his lines.

My father is atheist and my mother is, what I like to call, a buffet-Hindu (she isn’t overtly religious but she handpicks certain ways of Hindu life, critiques Hinduism, and only partakes in mainstream expression of it on some festivals). Meanwhile, my grandmothers are both religious, and one of them raised me. They were my source of nightly snippets of Ram, Krishna, and the Pandavas. As a result, my upbringing was a mix of the Hindu way of life over the actual religious aspects, and a welcome experimentation and exploration of my own relationship with religion and spirituality.

But, maybe if I had an Aru Shah to guide me as a child, maybe my introduction to Hinduism would’ve been friendlier than seemingly outdated ancient stories, and healthier than forced, performative Hinduism stemming from conservative beliefs in the community. While these stories were a delight to listen to, they also alienated me when wrapped up in all the politics and practice of the religion – something I didn’t need or welcome as a child. Perhaps if I had this book as a kid, my relationship with my own identity would’ve been more positive.

Aru being lovable goes a long way. She is such a lovely protagonist and what I love about her, right from the start, is how flawed she is. The fact that all this starts with her lies and attempt to impress others makes her so different from conventional heroic standards, and her subtle character growth through the book is believable. I would root for her, any day of the week.

Mini is equally lovable. Firstly, she’s such an endearing character that I would protect her every chance I get. But, I also love how Chokshi mentions Mini’s experiences growing up between the expectations of an Indian and Filipino family.

I also appreciated that, when her character introduction described her appearance being closer to South-East Asian than brown South Asian, the book reiterates how South Asia is a diverse subcontinent. It’s a very important point to make in a society that continues to strip the identities of Indians who look more East/South-East Asian than they do stereotypically brown. The world (and racist Indians) needs to understand that India is not just diverse in culture, religion, and languages, but also race and ethnicity.

I could keep going on about everything I loved. The plot was engaging, the dialogue was absolutely flawless, and the progression of the story left no doubt that people will want to keep reading this series. I have my suspicions about some things to come, and I also have a lot of expectations and theories about which household mythological name I will see next. Either way, I can’t wait.

I urge everyone to check out this book, whose sequel Aru Shah and the Song of Death, comes out in April. You don’t want to miss this series.