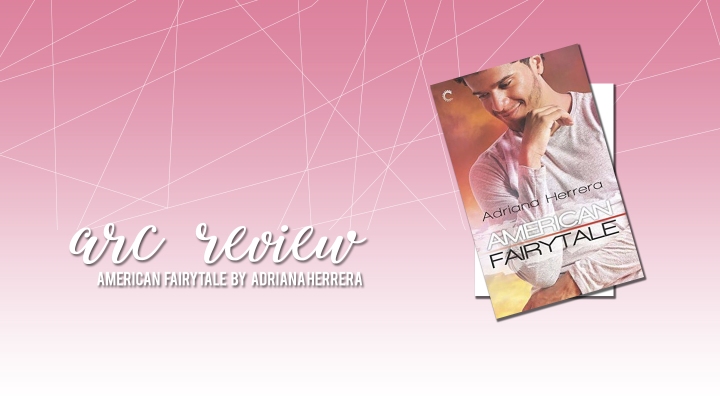 I received an A.R.C for this book from NetGalley in exchange for an honest review.

This review is spoiler-free.

This book might be one of the cutest romances I’ve read in a while. American Fairytale was exactly the kind of book I needed to read right now because it was not only an easy and quick read, but also put me in the most optimistic and happy mood. Happily-ever-afters have a lovely way of making you feel warm and fuzzy inside. I’m glad to say I could walk away from this book feeling much lighter than I did when I got into it.

American Fairytale follows Camilo Santiago Briggs, a social worker, and Thomas Hughes, a self-made millionaire and businessman. They meet under fairly casual circumstances, not expecting the other to leave such a strong impact on them. When their paths cross again, they must not only find a way to put aside their own flaws and baggage to make a relationship work, but also find ways to fit into the unfamiliar worlds they present to each other.

The concept of one half of a couple being ultra rich has been done so often that it’s pretty much considered a trope in the writing industry. Personally, I don’t have a problem with this trope at all. But there are certain important aspects of it that are rarely dealt with that make me uncomfortable – perhaps because they’re brushed aside or because they are difficult conversations to have. More often than not, the half of the couple that has less money is easily demonised (by readers and by characters in the story) for not accepting the well intentioned charity of the richer half. This is something I’ve always found alarming. Putting money in the middle of a relationship can completely change the nature of it, and people on the less privileged end are entitled to feel wary.

American Fairytale did not hesitate to hit those nails on the head. Without giving any spoilers, I was so impressed with how both Camilo and Thomas handled the conversations about their different monetary backgrounds, the privileges and power held in the relationship, and how to work around them in a healthy manner.

Another aspect of the storytelling that I thoroughly enjoyed were the side characters. Both Camilo and Thomas’ friends are incredibly amazing people, who are so supportive of those they love and this new relationship. At the same time, they do not hesitate to provide the honesty and constructive criticism they owe to their respective friends. I loved how they could give honest feedback to Camilo and Thomas in a way that they might not have been able to give to each other (especially in the start of the relationship and during that one argument).

The book did an excellent job of not only showing the honest transparency of their friendship, but also provided an alternate point-of-view to the problems Thomas and Camilo faced. It also helped the reader understand what both parties are going through, and neatly showed how everyone sees the situation so we can quickly find a solution. After all, there were no “bad guys” – it was difficult situations they had to learn to work around.

I also really appreciate the way the book handled mental health and conversations about abuse. These conversations are important to me and I am grateful that the author treated them with absolute respect. In general, the book has a lot of uplifting, important, and positive messages about society and culture, and it’s what made me love this book even more. There was so much rich history of New York that went into the story. There were also so many cultural elements that were included, given the incredibly diverse cast of characters. I can’t stress enough how much POC (and intersectional minorities amongst POC) deserve happily-ever-afters and cheesy fairytales – and this book gave us exactly that.

This was my first Adriana Herrera book, and suffice to say, I am very much looking forward to reading more. You don’t want to miss this adorable romance between two very different people who find the strength and love to make a seemingly-impossible relationship work so well. Check out American Fairytale, which releases on 20 May 2019.

Trigger Warning: This book discusses depression and domestic abuse (not described) from a non-POV perspective.